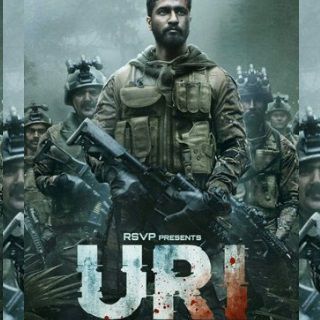 Uri: The Surgical Strike is an upcoming 2019 Indian action film written and directed by debutant Aditya Dhar and produced by Ronnie Screwvala under his banner RSVP Movies. Starring Vicky Kaushal, Paresh Rawal, Mohit Raina and Yami Gautam, the film is based on the 2016 Indian Army's surgical strikes on Pakistan Administered Kashmir as a retaliation for the Uri attack. It is set for a theatrical release on 11 January, 2019.

What are your plans for 11th January 2019? We hope whatever you have got planned can be dropped because you need to buy tickets to Uri: The Surgical Strike and go watch the movie on the first day itself. We say this because the much-talked movie, Uri has a made a huge buzz and the audience can’t wait to reserve their seats in the hall for 11th or the latest show they can get. With so many people out there we wouldn’t want you to get spoilers from the ones who would already have had seen the movie. And here’s more, if you are worried that the tickets to the shows of Uri will be expensive, then it’s time to swipe all the unnecessary burden left cause we have a list of Uri movie tickets offers that will cover for any added expense.

What is the Storyline of Uri: The Surgical Strike?

19 Indian Army soldiers laid their lives in Uri when an Army base camp was attacked by Pakistan back in 2016. Uri: The Surgical Strike, is based on India’s response to that. The Indian Army retaliated by conducting a surgical strike in Pakistan. The film Uri is all about the events that lead to the surgical strike. Uri will take you on a virtual tour of how the strike was planned and what emotions flowed through the leaders and the team that was entrusted with the task. The Surgical Strike conducted by the Indian Army has been a topic of debate ever since it happened in 2016, but it has been a celebratory event for our country. Indians take pride and seeing it happen on the screen will be a revelatory journey for all.
The movie is all set to release on the 11th January 2019, and the cast of Uri are promoting it on all platforms.
The Uri cast includes the following actors:

The movie has been directed by Aditya Dhar. Uri: The Surgical Strike has created a special kind of buzz among the audience. A lot of factors have a major contribution in the frenzy state that the fans are in right now. Also, Vicky Kaushal sure has his ways of impressing everyone with his acting skills. Ever since Uri’s trailer was released to the audience, people cannot stop talking about the mind-blowing action that we just got a glimpse of in it.

What Uri Movie Offers Are There?

Excited about Uri:The Surgical Strike? Want to get the best deals on Uri movie tickets online? We know the best place where you could find the best Uri movie tickets offer. Book Uri movie tickets on Paytm and use the Paytm first-time movie coupon, GPMOVIE, and get flat 50% cashback up to Rs.160.
Offer is strictly valid once per new user for Paytm movie offers.
Hurry up! The offers will last for a limited period of time and after that escapes from your hands you might have to book your Uri movie tickets at a higher price.

If you want to watch Uri online then you will have to turn to all the amazing platforms that serve you the best of Bollywood, Hollywood, and movies from around the world. You can catch Uri on Amazon Prime, Hotstar, Sony Liv. The content availability will vary with each streaming partner.

As for Uri, it has been one of the most awaited films of the year and there is no way you would want to miss it. There are a lot Uri tickets booking offers circulating online and it is time that you go and grab as many deals as you can.

If you are a CitiBank account holder then you can book two movie tickets using your CitiBank Credit/Debit Card and this Paytm CitiBank discount offer can fetch you a 100% cashback on the second movie ticket you purchase.

With this BookMyShow movie ticket offer, you can get up to Rs.500 cashback on your movie ticket bookings using Amazon Pay. No coupon code is required to avail this fantastic offer.

This offer can fetch you a 20% on TICKET4U. The maximum cashback that you can get out of this offer is Rs.50.