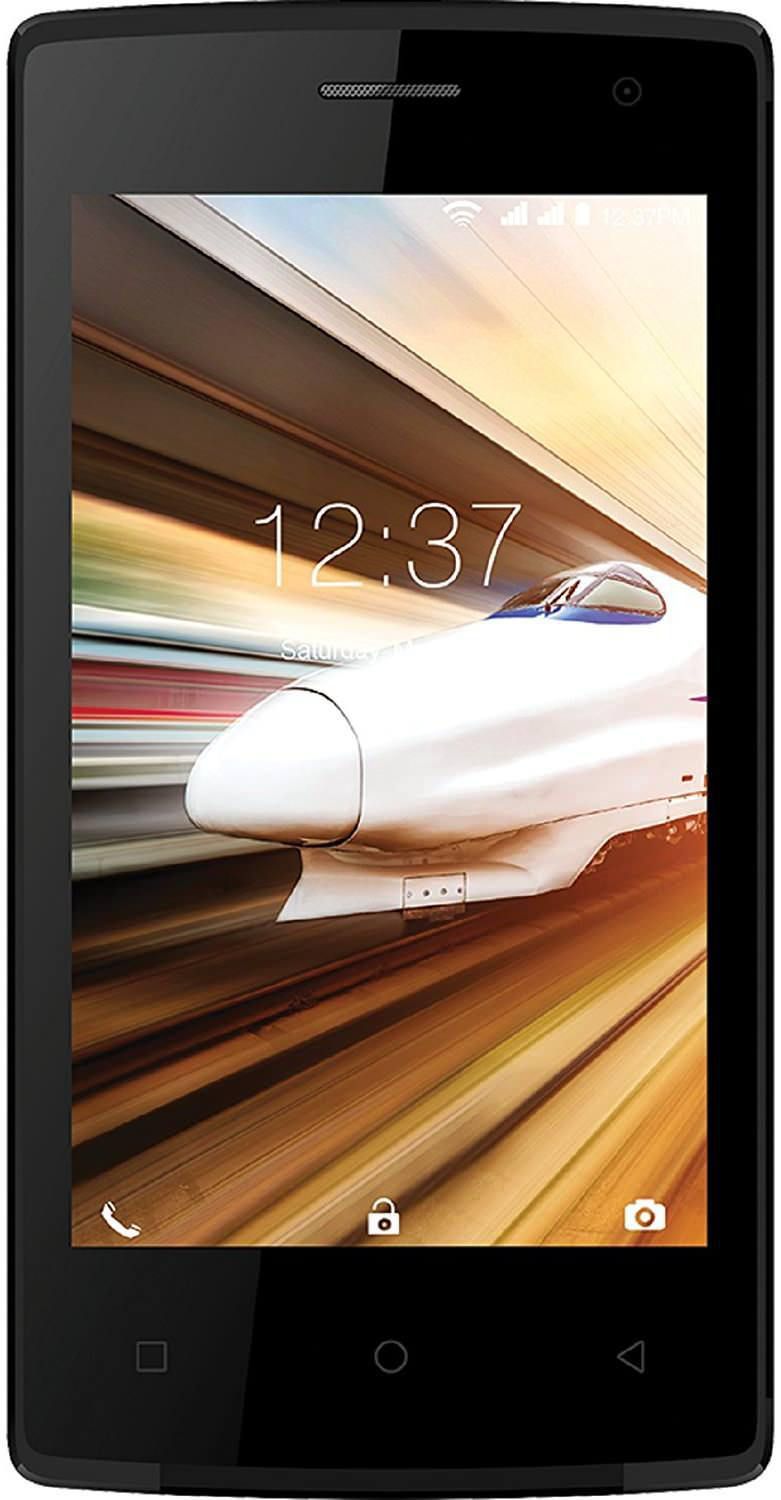 Conclusion:
The Intex Aqua A4 like we mentioned above is a decent phone even at a price of Rs. 3,299. The build quality is good, we get the latest operating system, the performance for simple day-to-day tasks is decent, it has 4G VoLTE support, and if you are willing to stick to Airtel, you can get the device for as low as Rs. 1,999. There are not many phones in the market at this price point that can compete with the Aqua A4 on the specs front. So, if you are looking to shift from feature phone to Android phone, we suggest you go with the Aqua A4.
Introduction:
Intex back in May has launched the Aqua A4 smartphone which is an entry-level phone that comes with key features like 4G VoLTE, Android 7.0 Nougat OS, 1GB RAM at a price of Rs. 3,299.  Even at the asking, the Aqua A4 is a good buy at least on paper. To make things even better; Airtel has partnered with Intex after Karbonn and Celkon to launch the A4 at an effective price of Rs. 1999 given that you stick with Airtel network. Keeping aside the telecom side of the phone, in our today’s review we shall find out if the device is worth buying at the new effective price. Let’s get started.

The Aqua A4 sports a 4-inch WVGA (480 x 800 pixels) display and is powered by the Spreadtrum SC9832A Soc clocked at 1.3GHz Quad-core processor with 512MHz Mali MP2 GPU. There is 1GB RAM and 8GB internal storage that is further expandable up to 64GB via microSD card. The device runs on Android Nougat 7.0 OS.

In the camera department, there is a 5-megapixel rear camera and a 2-megapixel front camera. Connectivity features include 4G VoLTE, Bluetooth, WiFi 802.11 b/g/n, GPS. A 1750mAh battery is on board.

The Intex Aqua A4 being an entry-level phone which is mainly focused on first-time smartphone users, the build quality is very ordinary. It is made out of plastic but does feel sturdy and good while using. The edges are rounded on all corners; hence it doesn’t hurt much. Thanks to a very compact 4-inch size, the one-handed usage is also great, but do note that there is very less screen to body ratio for media and game consumption. The rear panel has textured design which offers good looks and grip as well. Though the device looks quite sturdy, it might not survive more than a couple of drops, but thanks to comfortable hold, you won’t drop it that easy.

Moving to placements, the front of the device houses a 2MP selfie camera, the usual set of sensors, main earpiece and down below, you find the three capacitive keys which aren’t backlit. The volume rockers and the power button is present on the right, and the 3.5mm headphone jack along with the microUSB port is present on the top. At the bottom, you have the primary microphone. Flipping the device to the rear is where the 5MP camera, LED flash, Intex logo, main speaker grill is present. Strip opening the back panel gives you access to the sim card and microSD card slot and 1750mAh battery. Overall, a decent offering from Intex at this price point.

The Intex Aqua A4 sports a 4-inches FWVGA (480 x 800 pixels) display with no protected glass on top, but the company is offering a screen protector within the box. As with most entry-level phones, the Intex Aqua A4 too get a low-resolution display that isn’t that great. The color reproduction is not the best we’ve seen. The screen looks pale even with maximum brightness, and this affects the viewing angles as well. More often than not, we did notice color distortion with slight tilt while gaming. We didn’t really have a good time watching videos or playing games with the display that produces colors this bad. Touch response is good so are the brightness levels. We were able to access content outdoors with maximum brightness.

The only complaint we have with the display of the Aqua A4 is its poor color reproduction which even with maximum brightness tend to become overexposed. The company has bundled a screen protector which should do fine in preventing scratches to some extent. Overall, the display section is a letdown, and we really wish Intex had included a better panel given the popularity it has in this segment.

The Aqua A4 is powered by the MediaTek SC9832A Soc clocked at 1.3GHz Quad-core processor with 512MHz Mali MP2 GPU and 1GB RAM. MediaTek chipsets have slower processing speeds compared to its counterparts, and it becomes quite evident on the Aqua A4. The performance in general day-to-day usage is decent, essential tasks like browsing, taking calls, checking social media updates work smooth. However, good things about performance end there. Apps take a good 3-4 seconds time to open and load entirely, and they become unresponsive if you have more number of apps running in the background than it can handle. To keep the device from lagging or dropping frames, we advise you to clean the unused background apps.

Even with default stock apps like messenger, dialler takes time to load, and they feel quite laggy while typing or dialing numbers. Though there is 1GB RAM, it doesn’t really help in keeping things smooth thanks to bloatware apps and not so smooth U.I. Moving to gaming, we played games like Subway Surfers, Temple Run 2, Asphalt Nitro and all these games ran fine. But as we mentioned in the display section, we didn’t really have a good time playing games thanks to poor color reproduction. Overall, the performance of the Aqua A4 is yet again not very impressive and just gets the basic tasks done, while anything beyond that is not very pleasant.

The Intex Aqua A4 comes with a 5MP rear camera with LED flash and a 2MP front camera. The camera can click decent shots with reasonably good colors and details given that you are in bright and well-lit conditions. There is autofocus support, focusing is quick, and the app is fast in clicking picture as well. End of the day what actually matters is whether the device is capable of clicking good photos or not, and the Intex Aqua does a decent job. The colors are good, but they tend to get overexposed which results in the unnatural output. Moving to low and artificial conditions, this is where the camera feels utterly useless.  The images are dark with blurry pictures and washed out colors. There is LED flash, but as we mentioned, the photos tend to become overexposed.

The rear camera can record 480p videos, and the quality of the output is just fine. On the front, there is a 2MP rear camera, and the selfies clicked even in good lighting conditions are very poor in details and colors. There is beauty mode by default, and it doesn’t really help. Overall, the camera of the Aqua A4 is decent only with the pictures clicked outdoors and well-lit conditions.

The Intex Aqua A4 packs a generous 1750mAh battery with no fast charge support obviously. With casual to moderate usage that includes taking calls, sending text messages, listening to music for a while, browsing with 4G, we were able to get a battery life of somewhere close to 2 to 3 hours of screen on time. This is a decent battery life for such a low capacity unit. There was a little battery drain when the device is left idle overnight, and it was even more if you have 4G or WiFi turned on.

Though with moderate usage, the battery life was decent, but on continuous to heavy usage, the battery could only last until afternoon. Adding to the fuel is the longer charging time, the phone took close to 2 hours 30 minutes of time to charge the battery entirely from 1 to 100%. Overall, the battery department of the Intex Aqua A4 is not very impressive, and we suggest you carry the charger all the time if you are a heavy user.

The company is bundling a pair of earphones within the box, and they are in-ear style, but poor in quality. Moving along, the audio performance via the bundled earphones is loud and clear. We did hear distortion in sound on maximum volume. The loudspeaker is placed on the rear side, so it gets muffled when playing a song placing the device on a flat surface.

The Intex Aqua A4 runs on Android 7.0 Nougat out of the box, and the interface is very identical to stock experience. There are no customization options or features, and if you wish to change the look and feel, PlayStore is your only choice. The device comes with Google apps pre-installed and apart from them; there are a ton of preloaded apps like Gaana, Amazon, Daily hunt, etc. that are installed by default, and there is no way to get rid of them. The amount of pre-installed apps is on the higher side, and they do take a lot of internal storage as well.

Out of the 1GB RAM, there is around 500MB free on first boot, and the available free RAM is enough to keep the device smooth. The general U.I navigations, animations are smooth, and they are responsive to taps as well. There is no lag or stutters in the general U.I use cases, but when it comes to multitasking, we did notice the device slightly slowing down and lagging while switching or while running apps as well. Even with 2-3 apps running in the background, the phone never ran smooth, and it becomes even worse if you kept using. One consolation here is the Stock Android U.I which keeps things smooth to some extent. Overall, though we are getting latest Stock Android, the number of bloatware apps and multitasking experience are a letdown.