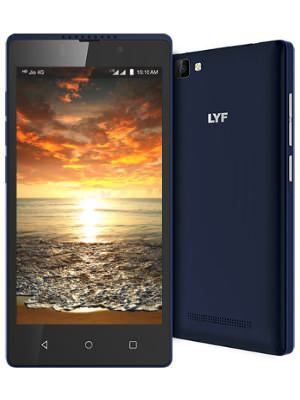 Reliance Jio being a new entrant in the smartphones segment and after impressing with their Jio telecom network with so many lucrative offers, the expectation on their LYF brand was high. To some extent, the company has tried to reach them too. For an entry-level phone, the build quality and the design is good, even the performance for casual users is good, 1GB RAM helps in smooth multitasking, and the Stock Android experience is bliss for first-time smartphone users. The 4G VoLTE support is yet another added advantage in this price bracket. That said, the camera performance and the display quality are a letdown. The display just fails to produce good color output and is even reflective making it tough outdoors, while the camera performance is outright terrible especially in low-light conditions. But then again, for a smartphone at this price, the brand seems to have done a decent job overall.

Though, there are Intex and Lava phones are competing directly at this price, we still feel the C459 does offer a better value for money. But, if you are still looking for alternatives, the Yu Yunique 2 Plus is surely a worthy alternative to keep in mind.

Reliance Jio is a game changer in India, the phenomenal rise from just a startup to the largest telecom network is just amazing. Thanks to the lucrative welcome offers, Jio has gained immense popularity among the mass audience within no time. Though being started as a telecom network initially, Reliance has slowly expanded it to other segments like the smartphones, feature phone, the segment as well leaving no stone unturned. The company has introduced their LYF brand smartphones with an aim to offer better hardware with 4G VoLTE support at an affordable price. Coming from the same pack is the latest LYF C459 which is currently available for just Rs. 4,500 and comes with 4G VoLTE support. Let’s see if the new LYF phone has what it takes to claim the best entry-level smartphone tag.

The device sports a 4.5-inches (800 x 480 pixels) IPS 2.5D Asahi glass display and is powered by the Qualcomm Snapdragon 210 SoC clocked at 1.3 GHz Quad-core processor. There is 1GB RAM and 8GB internal storage with a microSD card slot for memory expansion up to 128GB. It runs on Android 6.0 Marshmallow out of the box.

In the camera department, there is a 5-megapixel rear camera with LED Flash and a 2MP front- camera. Connectivity features include 4G VoLTE, Dual SIM, Wi-Fi 802.11 b/g/n, Bluetooth 4.0, GPS. A 2000mAh battery is on board for battery needs.

The Reliance LYF C459 comes in an all plastic candy bar design that surely looks amazing for the price tag. The metal like silver frame running around the corners gives it a good grip while holding in hands. The rounded edges are bliss for those who use smartphone continuously as it won’t hurt your hands. Being 4.5-inches in size, the LYF C459 is ideal for one-handed usage, and the 2.5D curved glass that runs until the bottom of the front screen feels premium and also makes up for the in-hand feel while watching movies or playing games in landscape mode. Though being plastic, the rear panel has smooth rubber finish which offers the comfort and grip. Up front, you have the 2-megapixel camera, the usual set of sensors, primary earpiece, and down below the screen, you find the three-touch type capacitive buttons which are painted in white but aren’t backlit. The volume rocker and the power buttons are placed on the left, while there is nothing on the right side. The 3.5 mm audio jack and the microUSB port are placed on the top, and at the bottom, you just have the primary microphone. At the back, you find the 5-megapixel camera, LED flash, LFY branding, speaker grills. The back panel is removable giving you access to the removable battery, SIM card, and a microSD card slots. Overall, the build and design of the smartphone at this price is quite good despite being plastic.

The Reliance LFY C459 sports a 4.5-inches FWVGA 2.5D Asahi curved glass display. At this price range, we can’t be expecting a 720p panel, so we will have to settle for a 480p display. Talking about the screen, the color reproduction is decent, but the content gets overexposed when the brightness is put at maximum. The 2.5D curved glass not just helps in giving the device a good look, but also contributes to the ergonomics. Watching videos should be a good experience end of the day. It comes with the ambient light sensor, so you don’t have to adjust the brightness all the time manually.

It is also responsive, and the viewing angles are alright, but we noticed a blue color hue while tilting the device to extreme angles. The brightness levels are good, but, thanks to the reflective nature, viewing the display outdoors or under sunlight will be a problem even if we crank up the brightness to maximum. For the price, the display sure does justice but fails with average color output and reflectiveness. Overall, the display is acceptable, and the 2.5D curved glass is a welcome addition to this price range.

The LYF C459 is powered by the Qualcomm Snapdragon 210 SoC clocked at 1.3GHz Quad-Core processor with Adreno 304 GPU. The performance, in general, is good and snappy with apps opening and responding instantly. We never faced any major stutters or lag in the U.I with casual to moderate use. We were even able to multitask smoothly with limited numbers of active apps. But, on heavy use, the device severely lags and drops frames. It couldn’t handle resource-intensive applications and tasks, as the Snapdragon 210 is quite aged for today’s apps. Being a Qualcomm chipset, the processing speeds are better than MediaTek chipset, which is a silver lining here. As far as you use the device with moderate tasks and apps, it won’t show any major issues, but of heavy use, the lag is quite evident.

Moving to gaming, we ran games like Subway surfers, Temple Run 2, Riptide GP 2, Leo’s Fortune and more often than not, these games ran fine with graphics rendering just fine. However, the colors and graphics look pale at times, and frame drops are visible too. Nonetheless, gameplay was still good, and we can’t complain much at this price range. Overall, the performance is good strictly for average and casual users, as for heavy users, they will have to bog down their expectations and usage for smooth functioning.

The device packs a 5-megapixel rear camera with LED flash and a 2-megapixel front camera. Talking about the camera performance, when in good lighting and well-lit conditions, the images turn out fine with acceptable color output and details. Focusing is a bit slow, and it quickly loses focus once the device is moved. The color contrasts are decent, but it tends to get oversaturated and becomes dull when clicked in indoors. Moving to the low-light, the images are completely faded out, and the colors look washed out. LED flash helps to brighten the pictures, but the output still is terrible.

The camera app is simple with toggles for auto mode, video, flash, front camera. It opens up quickly but takes time to load and become fully functional. The device can record videos in 480p, and the video quality is quite shaky and noisy at best. The front 2-megapixel shooter is usable only in good lighting conditions. However, the selfies clicked are grainy, and they look bad even on the phone’s display. So, you should click selfies in good lighting conditions to get optimal results out of this camera.

Overall, the camera is a letdown for the LYF C459, and we are not sure about software update as well, so chances of improvements in camera performance are slim.

The device packs a 2000mAh battery that can be removable. With casual to moderate use that includes checking messages, taking calls, social media updates, etc. the battery can easily last up to evening with nothing to worry. But on heavy usage, you will have to charge it again before the day ends. Speaking of charging, as it doesn’t with any fast charge support, it takes close to 2 hours 40 minutes of time to charge completely which is yet another letdown if you are a heavy user. However, the good thing about the battery is that it doesn’t drain much overnight or while left idle for a long time. It does have a battery saver option, and it helps you when you are running out of juice. Overall, if you are a light user, the LFY C459 can easily last one full day, but if you are a heavy user, it will drain out the battery even before the day ends.

The 3.5mm audio jack is present on top while the speaker grills are present on the rear. The company has even bundled a pair of earphones which are very basic, so if you want a good audio experience, you will have to spend some money on a decent pair of earphones. We tried the headset we have with us and the output via the earphones was good for a smartphone at this price, there was no distortion noticed as well. The loudspeaker performance is good, and it gets quite loud even when you are in a group, so chances of missing a call while outside are less.

Moving to video, being a 480p panel, video playback too was restricted to 480p. Though we tried playing HD videos, the playback was freezing and even tends to become unresponsive. As said above, you will have to compromise on certain things when you are buying an entry-level phone, and HD playback is one among them which you will have to give up. Overall, baring the HD video playback, the multimedia experience to is acceptable.

The Reliance LYF C459 runs on Android 6.0.1 Marshmallow with Stock Android skin on top. The good thing about Stock U.I is that it consumes very less RAM which gives enough room for multitasking. However, you will miss out on customizations if you are into it. Apart from Google Apps, Jio suite apps come pre-installed, and few additional applications like the First Post, News18, Opera Mini browser, Yatra apps come by default, and there is no way you can uninstall them. Being the vanilla Android O.S, the interface, system menu’s, settings are all familiar, and nothing has been changed.