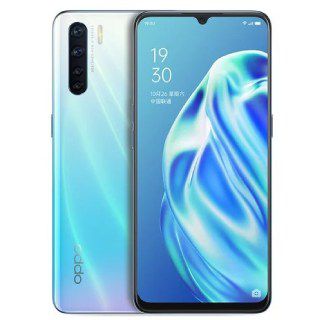 Oppo F15 Price in India Launching on 16th Jan. at Flipkart. OPPO F15 smartphone runs on Android v9.0 (Pie) operating system. Oppo F15 Phone Powered by Octa-core (2.1 GHz, Quad-core, Cortex A73 + 2 GHz, Quad-core, Cortex A53) processor. It runs on the MediaTek Helio P70 Chipset. It has 8 GB RAM and 128 GB internal storage. The buyers get a 16 MP Front Camera and on the rear, there's a 48+8+2+2 MP camera with features like Digital Zoom, Auto Flash, Face detection, Touch to focus. Others features in the smartphone are WiFi, Bluetooth, GPS, Volte, and more.

The teaser on Flipkart shows the device once launched will bring with it 8GB of RAM and 128 GB of internal storage capacity, a 48-megapixel lens-based quad-camera set-up, an In-display fingerprint scanner which could unlock the smartphone in just 0.32s, and VOOC Flash Charge 3.0 support. Apart from this, the company has also revealed a new image of the device, which gives another glimpse into what the design of the phone could be like. To know more about the release date, price, key features, and specifications; read the complete article.

As per a webpage on e-commerce site Flipkart, the Oppo F15 launch is scheduled to happen on January 16, 2020.

Oppo F15 at a Glance

What’s so good about Oppo F15? The answers lie below, as follows:

On the front, the OPPO F15 boasts a 16-megapixel front-facing camera with an f/2.0 aperture for sharp and stunning pictures.

If we talk about OPPO F15 design, the smartphone is 14 percent thinner and 12 percent lighter compared to other smartphones currently available in the market. Oppo F15 is 7.9mm thick and weighs only 172 grams.

The OPPO F15 sports a massive 6.4-inch FHD+ Super AMOLED display with a narrow waterdrop notch to deliver a truly cinematic experience. The display also features an under-display fingerprint sensor which can unlock the device within 0.32 seconds. Further, all new OPPO F15 comes with a spacious 20:9 aspect ratio and has a resolution of 1080 x 2340 pixels with a pixel density of 403 PPI.

The Oppo F15 model is coupled with 8GB RAM and 128 GB of internal memory. The phone offers ample room for all your files, photos, and games.

This powerful smartphone is backed by a Non-removable Li-Po 4025 mAh battery, equipped with a reversible design type-C USB port. The gigantic battery size means you won’t face battery problems in the middle of your day. Oppo's latest VOOC 3.0 fast charging technology is one of the best offerings from Oppo as it can charge the device sufficiently to deliver 2 hours of talk time with only five minutes of charge.