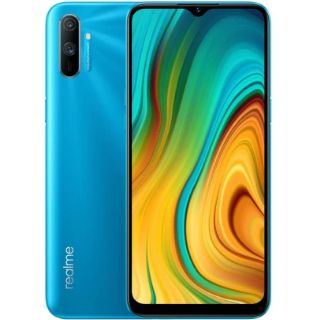 The Realme C2’s successor has broken its cover on Flipkart. Touted as "Entertainment Ka Superstar", the new Realme C3 smartphone may be particularly interesting as it is the first in C-Series to be powered by the MediaTek Helio G70 gaming chipset. The Taiwanese's this new G-series SoC will bring features such as HyperEngine gaming technology to budget-centric users of the smartphone market. Another highlight of Realme C3 is that the device will also have a 6.5-inch display and dual rear cameras, albeit ones that may improve over those found in the C2 in specific ways. A banner on Flipkart also revealed it would have a 5000mAh battery.

Realme has set up a landing page on Flipkart with a tagline "Entertainment Ka Superstar", and has highlighted many of the features of the device. However, the complete features and price aren't revealed yet; we have to wait till the launch date, i.e., on Feb 6. If you're looking for Realme C3 release date, expected launch price, specifications, and launch offers, read the entire post.

What’s the Realme C3 ‘Entertainment Ka Superstar’ will offer? Check it out!

Packed with surprisingly great hardware, the upcoming Realme C3 is a real 'Entertainment Ka Superstar'. Check out the glimpse of Realme C3 smartphone below:

When will Realme C3 launch in India?

Realme C2's successor, Realme C3 is now being teased on Flipkart m-website, and the teaser post clearly suggests that the phone will launch on Feb 6 in India. The phone will be launched during a press event in India that will kick off at 12:30 pm on the day. The company will likely be live streaming it on Youtube as well as social media channels. As always, GoPaisa will bring you all the information related to Realme C3 specifications, price and launch offers.

Given we are still days away from the Realme C3 phone launch, the company hasn't given a hint about the pricing. Though it is certain to be an entry-level smartphone like its predecessors, it is expected to launch at Rs. 7,999 in India. To recall, Realme C1 was priced at Rs. 6999, whereas Realme C2 launched at a price tag of Rs. 5,999 for the 2GB /32GB variant and Rs. 7,999 for the 3GB/32GB RAM variant. So, we can expect the upcoming Realme C3 pricing should also be in this range.

Well, you heard it right. Realme C3 will not go on open sale at early stage. if you are planning to get one, you will have to buy Realme C3 in Next sale at Flipkart. Realme C3 will be sold in India via flash sale module.

What will Realme offer in its new Realme C3 phone? Realme C3 specifications in details

Flipkart’s recent banner teased on microsite clearly suggests that the upcoming Realme C3 will be powered by an octa-core Mediatek Helio G70 (12 nm) processor. This is the first time Realme is using G70 SoC in its smartphone. The Mediatek Helio G70 is the latest lower midrange chipset that offers the best performing processor in the segment. This is a 12nm chipset that incorporates a pair of powerful Arm Cortex-A75 CPUs operating up to 2GHz, plus six Cortex-A55 CPUs in a single, octa-core cluster. With a score of 194170, the chipset gains the highest AnTuTu benchmark score.

According to the Flipkart's banner on m-site, Realme C3 will come in two RAM and storage variants. The base model has coupled with 3 GB RAM and 32 GB storage, whereas the higher variant is coupled with 4GB and 64 GB internal memory.

Touted as “Bade Battery Ka Superstar”, Realme C3 is a real superstar in terms of battery. The phone is backed by a Non-removable Li-Po 5000mAh battery which is capable of delivering 30-days standby time, approximately 44 hours of calling, 19.4 hours of music streaming and 20.8 hours of youtube playback. For an intense PUBG lover, Realme C3 is the best bet. The phone can deliver 10.6 hours of continuous PUBG gameplay without a pause.

Realme C3 sports an IPS LCD capacitive touchscreen display which happens to be the largest one in the whole series by far. A 6.5-inch large screen with a resolution of 720 x 1560 pixels and a 19.5:9 aspect ratio makes the phone a real "Bade Display Ka Superstar". The only drawback here is that it has only HD+ display. The screen size offers a higher 89.8% screen-to-body ratio with thin bezels. The display is also protected with Corning Gorilla Glass 3 protecting it from minor drops.

The third generation of Realme C-Series has upgraded the design. Like its predecessors, again you’ll find a complete plastic body protected by Corning Gorilla Glass 3. The phone will be available in blue and black colour variants.

For photography, Realme has significantly improved the camera over last year's Realme C2. The Realme C3 sports an AI super camera setup featuring a 12-megapixel primary sensor with an f/1.8 aperture for stunning pictures and a 2-megapixel depth sensor with an f/2.4 aperture for Bokeh effect. The rear camera is packed with features such as Chroma Boost, Slow-motion Video, dedicated HDR mode, and Panorama selfie mode. Interestingly, the camera samples available on the Flipkart microsite indicate that the latter could be a macro sensor. More details on the cameras will be out on the launch day.

In the front, there is a 5-megapixel AI mini-drop selfie camera for taking stunning selfies.

Realme C3 is a dual-SIM (GSM and GSM) smartphone that accepts Nano-SIM cards. Connectivity options on the Xiaomi Mi Note 10 include Wi-Fi Wi-Fi 802.11a/b/g/n/, GPS, Bluetooth v4.2, MicroUSB 2.0, 3G, and 4G (with support for Band 40 used by some LTE networks in India). If we talk about sensors, it includes an accelerometer, ambient light sensor, compass, gyroscope, proximity sensor, and fingerprint sensor (rear-mounted).

Although the C-series is primarily meant for entry-level users, Realme could be looking to up the game with an affordable gaming phone in the form of Realme C3. Stay tuned to GoPaisa for more updates related to Realme C3 price, specifications and Flipkart offers.

As we already know, Realme C3 teased a “Entertainment Ka Superstar” banner in Flipkart, dropping a fair few hints at what the smartphone will offer potential buyers. The phone will exclusively be sold on the Flipkart website for Indian consumers and will come with exclusive launch offers as we had seen in Honor 9X. Apart from exclusive launch offers, customers will also get additional bank discount offers, and cashback offers on leading bank credit and debit cards.