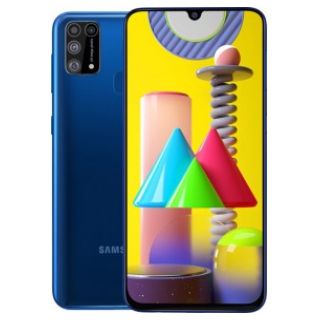 Chinese smartphone manufacturers like Realme and Redmi have already launched their first budget-centric smartphones in India; the Korean tech giant Samsung is not too far. Starting the year 2020 with #MegaMonster Galaxy M31, Samsung is all set to hit the mid-range market with an aggressively priced budget smartphone. The Samsung Galaxy M31 #MegaMonster will come as the successor to the Galaxy M30. Some of its specifications that have been shared so far make it more of a spruced-up variant of the Galaxy M30s. To know more about Samsung Galaxy M31 launch date, expected price, specs, and Amazon offers, read the complete post.

Samsung Galaxy M31, a new smartphone in M-series lineup, finally has a launch date in India. A microsite created by the company revealed that the Galaxy M31 would launch in India on February 25, 2020.  The new Samsung smartphone, which will debut as the successor to the Galaxy M30, will come with a 64-megapixel primary camera at the back, FHD+ sAMOLEDinfinity U display, along with a massive 6000mAh battery under the hood. One of the variants for the Galaxy M31 comes in glossy Blue colour, as seen on the Amazon site. Amazon India has started teasing the phone, indicating that the phone will be available for Indian customers via their website.

A glimpse of Samsung Galaxy M31

What's new in the upcoming Samsung Galaxy M31? Check it out here:

The Samsung Galaxy M31 will be unveiled in India on February 25 at 12 pm (noon). It could be a soft launch though, where the event will just be live-streamed on the Amazon website, company website and the YouTube channel.

Shop Samsung Galaxy M31 from Amazon.in using your Amazon Pay ICICI credit card and get 5 percent unlimited cashback on your purchase. The earned cashback will be credited directly to your Amazon Pay wallet in the form of Amazon pay balance once your next month statement is generated.

While purchasing Samsung M31 from Amazon, users can avail the benefit of No Cost EMI facility, which will be available on credit cards from major banks, select bank debit cards, Bajaj Finserv EMI cards and Amazon Pay EMI. Those who don't know what No Cost EMI is, it's an offer from major banks under which you pay your EMI provider only the product price, equally divided over your repayment timeline. For example, if you buy an Rs.12,000 item at a 6-month tenure, you will pay your EMI provider Rs.1,500 every month for 6 months, amounting to a total of Rs.12,000. However, your bank will charge interest, and this interest charge has been provided to you as an upfront discount at the time of your purchase, effectively giving you the benefit of a No Cost EMI.

Mobile phone exchange offer on Amazon lets you exchange your old phone for a new mobile phone at the right prices. With new Galaxy M31 emerging in the market frequently, all smartphone lovers would be curious to buy it online and operate it in order to enjoy the new technological experience. With Amazon Exchange Offer,  you can get a value of up to Rs. 8,000 for your old mobile on exchange.

Samsung's upcoming Galaxy M31 smartphone runs on One UI 2.0 based on Android 10 out of the box. The phone is likely to be powered by an octa-core Exynos 9611 processor. This is a 10nm chipset that incorporates four powerful Arm Cortex-A73 CPUs operating up to 2.3GHz, plus 4 Cortex-A53 CPUs in a single, octa-core cluster. The Galaxy M31 will come in two RAM and storage variants. The base model has coupled with 4 GB RAM and 64 GB storage, whereas the higher variant is coupled with 6 GB RAM and 128 GB internal memory.

The Samsung M31 smartphone sports a massive 6.4-inch FHD+ Super AMOLED display with a waterdrop style notch over the bezel-less screen. The screen has a resolution of 1080 x 2400 pixels, an aspect ratio of 20:9 and a pixel density of 411 PPI. The Galaxy M31 sAMOLED display offers a great viewing experience over the spacious screen.

For photography, Samsung has made a significant improvement over last year's Samsung M30. The Samsung Galaxy M31 sports a 64-megapixel quad-rear camera setup featuring a 64-megapixel primary sensor with an f/2.0 aperture for stunning pictures, an 8-megapixel wide-angle lens with an f/2.2 aperture for landscapes, a 5-megapixel macro camera with an f/2.0 aperture, and a 5-megapixel depth sensor with an f/2.4 aperture for Bokeh effect. The quad-rear camera on Samsung M31 comes with features like Night Mode, Ultra-wide Mode, Bokeh effect with live portraits. The other features include 4K recording, Hyperlapse, Super Slow Motion etc. On the front, the buyers get a 16-megapixel primary camera for selfies.