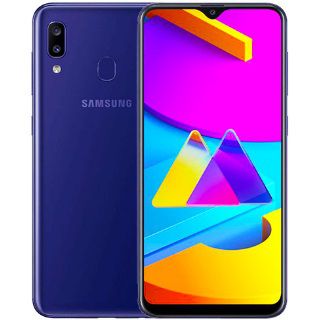 The smartphone industry has been abuzz with new upgrades in mobile phones, but the recently launched Galaxy M10s smartphone from Samsung has captured everyone’s attention. The powered offering by Samsung, which succeeds the popular pick of the Samsung M Series - Galaxy M10 - is built to last. From its gorgeous 6.4 inches sAMOLED display to the impressive ultra-wide dual rear camera set-up and an unparalleled 4000 mAh battery - all under budget price, truly makes the Samsung Galaxy M10s a perfect pocket-friendly smartphone. This budget-friendly offering from Samsung clearly trumps the rest.

Samsung recently launched Galaxy M10s is a fully-featured smartphone available at a budget price. Samsung M10s Diwali offer allows you to buy this smartphone at a jaw-dropping price. Besides, bank discount offers on Amazon website offers you save an extra on this smartphone along with No-cost EMI. So, get ready to grab fascinating Diwali mobile offers on the brand new Samsung Galaxy M10s smartphone.

What's so good about the upcoming Samsung Galaxy M10s smartphone? The answers lie below, as follows:

Why choose Samsung Galaxy M10s over Galaxy M10? Here is the reason

Samsung has launched only one variant of Galaxy M10s. The phone will be available in 3GB of RAM and 32GB of internal storage capacity and will be cost lesser than its predecessor Galaxy M10. Samsung Galaxy M10s (3GB/32GB) variant price in India is Rs 8,999.

Samsung Galaxy M10s sports a 6.40-inch HD+ Super AMOLED display with a V-shaped notch. The screen has a resolution of 720x1520 pixels and an aspect ratio of 19.5:9. The display has a bezel-less edge to edge HD+ display with stunning colours. The Samsung Galaxy M10s runs One UI based on Android 9 Pie and packs 32GB of internal memory that can increase in size via microSD card (up to 512GB) with a dedicated slot.

Most of the budget smartphones offer a wide-angle and telephoto lens but not with Samsung Galaxy M10s. This new device from Samsung sports a dual wide and ultra-wide camera on its rear. A 13-megapixel primary wide-angle camera with an f/1.9 aperture and a second 5-megapixel ultra-wide-angle camera with an f/2.2 aperture which allows you to take superb photos on all occasions. Also, you can click amazing group photos from the ultra-wide dual rear camera.

Samsung M series smartphones are best known for its incredible battery capacity. Although the new Samsung Galaxy M10s is an entry-level smartphone, it is back up by a massive Non-removable Li-Po 4000 mAh battery. The phone is also equipped with a reversible design type-C USB port supporting up to 15 watts fast charging. The combination of sAMOLED panel with this large battery will surely give you long hours of entertainment.

The Samsung Galaxy M10s is a dual-SIM (GSM and GSM) 4G smartphone that accepts Nano-SIM and Nano-SIM cards. There are 3G and 4G with active 4G on both SIM cards.

If we talk about the Connectivity options on the Samsung Galaxy M10s, the options include Wi-Fi 802.11 b/g/n, dual-band, Wi-Fi Direct, hotspot, USB Type-C, FM radio, and GPS with A-GPS, GLONASS, and BDS.