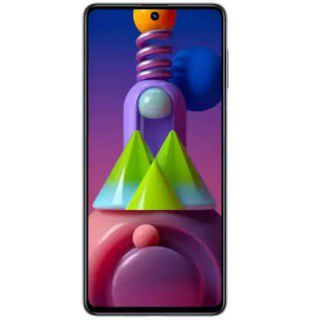 Samsung is all set to launch Galaxy M51 with an insane 7,000 mAh battery in India. The launch date is yet to be revealed but some of its key features and specifications have already been confirmed. If you're in search of  Samsung Galaxy M51 Price in India, launch date, specifications, and buying offers, you are at the right place. Here you will get all the details that you need to know.

Just a few weeks ago, Samsung launched its revolutionary Note Series smartphone - Samsung Note 20 Ultra along with Galaxy Fold 2 for its premium consumers, now the Korean tech giant is gearing up to launch a budget smartphone for its mid range users. Samsung Galaxy M51 is a new smartphone in M-series lineup teased in an Amazon microsite calling the device the “Meanest Monster Ever”.

We all already know, Samsung M-series smartphones are best known for its monster specifications at an aggressively budget price. The same we expect with the upcoming Galaxy M51. The new Samsung smartphone will come with a 64-megapixel quad rear camera, a gorgeous 6.67 inch FHD+ sAMOLED infinity-o display, along with a monster 7,000 mAh battery and 25W fast charging under the hood.  One of the variants for the Galaxy M51 comes in Blue colour, as seen on the Amazon site. Amazon India has started teasing the phone, indicating that the phone will be available for Indian customers via their website.

Samsung M-series lineup is already best known for their incredible battery capacity. Samsung's new Galaxy M51 mobile phone is expected to be backed by a monster 7,000mAh battery, equipped with a reversible design type-C USB port supporting up to 25 watts fast charging. The phone will also support a reverse charging for charging other devices wirelessly.

The Samsung Galaxy M31s will be unveiled in India in September. The exact date of launch is yet to be revealed but leaks suggest that it could go official in the second week of September. Stay tuned to this page for more updates related to Samsung Galaxy M51 launch.

The recently launched M31s is priced at Rs. 19,499 for the 6GB + 128GB storage variant whereas the 8GB+ 128GB internal storage model is priced at Rs. 21,499. So we can expect that the new Samsung Galaxy M51 is expected to be priced between Rs. 25,000 and 30,000 when it arrives in India. Please note that this is the expected price, the actual price of this smartphone will be unveiled during the launch date.

How to buy Samsung Galaxy M51 from Amazon?

If you want to buy a brand new Samsung Galaxy M51 online, shop it using your Amazon Pay ICICI credit card and get 5 percent unlimited cashback on your purchase. The earned cashback will be credited directly to your Amazon Pay wallet in the form of Amazon pay balance once your next month statement is generated.

If you want to buy this gorgeous smartphone, but don't have the amount to pay in full, Amazon offers you an option of No Cost EMI on major bank credit cards, select bank debit cards, Bajaj Finserv EMI cards and Amazon Pay Later.