News
News Gaming This gaming phone will change the way you play games! Everyone might have heard of gaming laptops and would have wished of having one, but very few would have thought of owning a gaming phone. Not only that, only a few people would be aware if there are any gaming phones, while many smartphone manufacturers mislead the consumers by tagging their smartphones as gaming beasts. A gaming phone is not one which comes with premium specs on the sheet, instead it’s the one with a good performance and doesn’t heat much, along with some sturdy boyish looks. Well, you should definitely have a look at what Asus ROG Gaming Phone looks like. It will definitely take your breath away, and while you think of playing games seamlessly and for long periods of time, you may not want to keep aside this real gaming beast.

Asus ROG Gaming Phone was unveiled at Computex in Taipei in the month of June this year. Ever since then, we were waiting for Asus to launch the gaming smartphone in India. The wait is finally over, as Asus has launched the ROG Gaming Phone in India on 29th November 2018. The Asus ROG Gaming Phone sports a 6-inch AMOLED panel with HDR, which comes with an 18:9 aspect ratio and a resolution of 2160 x 1080 pixels. The gaming smartphone is powered by an octa-core Qualcomm Snapdragon 845 chipset overclocked at 2.96GHz, coupled with Adreno 630 GPU for gaming along side X Mode which further enhances the gaming experience on the ROG Gaming Phone. The device is equipped with 8GB of RAM along with 128GB of on-board storage and 100GB free Google Drive space for 1 year.

In terms of optics, the ROG Gaming Phone sports a dual rear camera setup with a 12MP Sony IMX363 sensor (f/1.7 aperture) and an 8MP AR wide angle lens with OIS and EIS. The front camera is another 8MP sensor with an f/2.0 aperture and supports EIS. The rear cameras are capable of recording 4K UHD (3840 x 2160) videos at 30fps. Running on Android 8.1 Oreo-based ROG Phone UI, the Gaming Phone packs a 4,000 mAh battery under the hood to keep you engaged for longer periods of time. The device is IPX4 rated for water splash resistance and comes with 30W Qualcomm Quick Charge 4.0 to charge the phone’s battery from flat to 60% in just 30 minutes. Security features on the ROG Gaming Phone flaunts a uniquely-shaped fingerprint sensor that unlocks the device in 0.3 seconds. Additionally, one can also use the Face Recognition feature to unlock the gaming phone using the front facing camera. Connectivity options on the ROG Phone include Dual-band Wi-Fi at 2.4GHz/5GHz, NFC, Bluetooth 5.0, Dual-Nano SIM, Dual USB Type-C connectors, and 3.5mm headphone jack.

That’s enough of specifications, now let’s talk about other intriguing features of the ROG Gaming Phone. The display features an ultrafast 90Hz refresh rate with 1ms response time. The device is kept cooler while gaming, all thanks to the cooling system GameCool under the hood using carbon cooling pad, copper heat spreader, and 3D vapour-chambers. The front and rear glass come protected with 2.5D Corning Gorilla Glass 6 and 3D Gorilla Glass 5, respectively. The dual front-facing speakers with smart amplifiers will definitely blow your audio and gaming experience. The audio will not be muffled up while gaming on the ROG Phone. One of the most interesting features is the AuraSync RGB lighting on the rear of the device, the colours of which can be customised according to notifications and your own preference. The rear also packs cooling fans which are, too, customizable and can be controlled from within the Game Center to change the fan speeds.

Wrapping up, Asus ROG Gaming Phone launched in a black variant at a price of Rs 69,999 for the sole 8GB RAM and 128GB storage variant. The smartphone launched on 29th November in India and will be sold exclusively via Flipkart.com along with No Cost EMI options, discount and exchange offers. The ROG Gaming Phone box will include the device itself along with ZenEar Pro earphones, AeroActive Cooler, Type-C to C cable, SIM ejector pin, a 30W USB power adapter, and some documentations. The AeroActive Cooler will keep your phone cooler when you play games on the device and will, additionally, offer you another USB Type-C and 3.5mm headphone ports so that the bottom ports don’t hinder your gaming experience. Asus will soon make available the accessories for ROG Gaming Phone including a TwinView Dock, Mobile Desktop Dock, Professional Dock, and GameVice controller, all of which will be made available later and will be sold separately. The ROG Phone Case is already available on Flipkart at a price of Rs 3,499 which can also equip the AeroActive Cooler and will support Ultra-responsive AirTriggers for gaming. 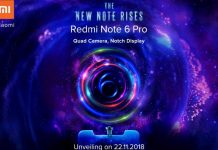