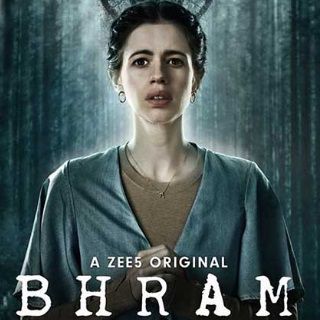 Bhram Zee5 Web Series Download or Watch Online: Currently there is no free trial offer on Zee5 premium subscription, So for now you can't download or watch Bhram series for free. But for a limited period Zee5 premium subscription for 1 month which cost you Rs.99, you can get it at 30% off using coupon - GET30. So after subscribing you can easily download Bhram tv series all episode in HD in Zee5 mobile App. if you just want to watch Bhram web series online, then you don't need to download Zee5 App. Bhram Zee5 series can be stream via Zee5 website, mobile site or app. Bhram is a ZEE5 Original psychological thriller series starring Kalki Koechlin, Eijaz Khan, Sanjay Suri and Bhumika Chawla. The story revolves around a female novelist who suffers from post-traumatic stress disorder (PTSD) and goes through many eccentric emotions while pursuing a story. if we found any legal way to download Bhram Zee5 Web Series full episode for free then we will update here.

Bhram: An upcoming psychological thriller web series will frighten you too, Watch the Kalki-Starrer show on ZEE5

ZEE5 Original's upcoming intriguing psychological thriller Bhram is a story of a novelist suffering from Post Traumatic Stress Disorder (PTSD), and Kalki Koechlin will be seen in the role of this novelist. The ZEE5 Originals show will be a web series of eight episodes, which can be streamed online only on ZEE5 OTT platform in September. To watch the first season of Bhram, you only require subscribing to ZEE5 Originals membership.

The first look poster of the upcoming ZEE5 Originals Bhram shared by the ZEE5 on Twitter. It post clearly reveals that the web series will start streaming on September month, but the exact release date has not been out now.

As we have already mentioned, Bhram web series will be streaming online on ZEE5 platform only. Therefore, you need a ZEE5 Subscription to watch the show online or download in HD. Once you avail the ZEE5 Subscription, ZEE5 gives you access to watch or download unlimited media content available on the platform in high definition. Including ZEE5 Originals, latest blockbusters, exclusive TV shows, 90+ live channels, you can also download Bhram Season 1 online in HD. The streaming is also available on Amazon Fire TV Stick & Smart TVs like Mi, Samsung LED, LG LED, etc.

You can subscribe to ZEE5 digital media for just Rs. 99/month or for Rs. 999 if you prefer 1-year subscription. While taking a ZEE5 subscription, you can watch all the latest blockbusters movies, exclusive TV shows, 90+ Live channels and ZEE5 Originals across 12 languages, all in High Definition. So, subscribe to ZEE5 now and watch Bhram web series online.