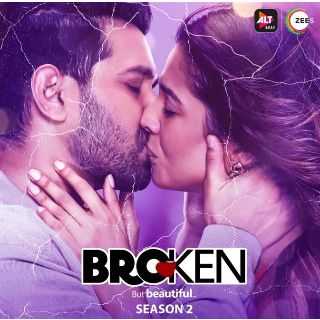 Why Should you wathch Broken Season 2

ALTBalaji Original Broken But Beautiful Season 2: How to watch the upcoming AltBalaji web series and Download in High Definition for free?

Just like the first season, the second season of Broken But Beautiful will give music lovers hummable original soundtracks. It's songs "Yeh Kya Hua" and "Laute Nahi" became instant hits among the audience. To watch the second season of this romantic web series online, you only require subscribing to AltBalaji membership. Everything you need to know about the Broken But Beautiful Season 2 cast, release date, and AltBalaji subscription offers, the answer lies below.

How to Watch the Broken Web Series Online?

AltBalaji's upcoming web series 'Broken season 2' can be watched online on AltBalaji and ZEE5 only. If you think there is another way to stream this web series online, you will be disappointed. To watch the second instalment of Broken web series online, you only require subscribing to either AltBalaji or ZEE5 membership. AltBalaji and ZEE5 viewers can stream and download Broken Season 2 episodes online along with all the latest web series such as Gandi Baat Season 4, Fixerr, Coldd Lassi Aur Chicken Masala, The Verdict: State vs Nanavati, and much more, all in high definition. So, subscribe to AltBalaji digital media platform now and watch the Broken Season 2 episodes online.

Vikrant Massey and Harleen Sethi starrer Broken But Beautiful web series trailer is out now. The show will be available for streaming from 27th November on AltBalaji and ZEE5. If you haven't watched the Broken Season 2 trailer yet, watch it now!

How to Watch or Download the AltBalaji’s upcoming web series ‘Broken' in High Definition for free?

Gone are the days when you can download web series from torrents and other untrusted sources. As we have already mentioned, the Broken web series will be streaming only on AltBalaji, so you can watch or download the upcoming web series in high definition from here only. If you already have an AltBalaji or ZEE5 subscription plan, you can stream or download the Broken Season 2 for free.

Where Can I watch ALT Balaji's upcoming Broken web series?

ALTBalaji - One of the best way to stream all the latest ALT Balaji original shows via AltBalaji app. You can download the ALTBalaji App from Play Store for free. If you have any friends or family members who have the ALT Balaji membership, you can ask them, and enjoy the series for free.

Zee5 - You can watch Broken But Beautiful 2 online for free on Zee5 app or Zee5 website. Just download the Zee5 app from the Play Store or go to Zee5 website and enjoy the popular romantic web series.

Vodafone Play - Vodafone users can watch the series whenever Vodafone got the right of the series on their platform. Till then, you have to wait.

Jio Cinema - Now Jio users can watch all the latest AltBalaji shows and web series for free with Jio Cinema app. Yes, you read it right! ALTBalaji is officially collaborating with Reliance Jio to make available its original content on digital platforms such as Jio Cinema and Jio TV. So, we hope the Broken Season 2 series will soon be released on the Jio Cinema app. Till then, you have to wait.

How can I watch ALT Balaji Original shows without a Subscription?

You can watch ALT Balaji original shows for FREE without taking the AltBalaji membership. The best way to watch Alt Balaji originals is MX player app. You can watch or download most of the ALT Balaji web series along with Broken Season 2 for free. AltBalaji shows are also available for free on Jio Cinema app or website.  Similarly, ALT Balaji Original can be watched through Vodafone Play App and Airtel TV app for free. Try these tips and tricks now to watch all the latest AltBalaji web series for Free along with broken Season 2.