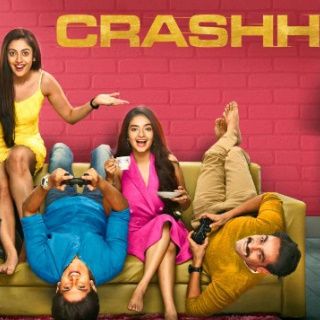 Download & Watch Crashh Web Series online at Alt Balaji site or App. Currently, there is no free trial offer on AltBalaji subscription, So you can't download or watch Crashh tv series for Free. But you can subscribe 3 Month pack at just Rs.100. After Subscribing you can watch all original web series. Not only this you can also download Crashh Web Series in AltBalaji App to watch later when you are out of the Internet. Another Way to Watch Crash series for Free is get Active AltBalaji login access from your friends and family.

ALTBalaji and Zee5 have always been a go-to OTT platform for the Indian audience. These online streaming platforms offering their fans a variety of shows across all genres, be it romance, crime, mystery, comedy, horror, or any other genre. Taking the legacy ahead, ALTBalaji and ZEE5 streaming platform announce yet another web series – Crashh, a beautiful saga of a sibling bond.

Crashh is a teen based drama series starring Zain Imam, Kunj Anand, Rohan Mehra, Aditi Sharma and Anushka Sen in the lead roles. Talking more about Crashh, the show’s story revolves around the relationships of 4 siblings who got separated at a very young age from one another after their parents got into a car accident and lost their lives. But when they grow up the destiny puts all of them in one place and everyone will feel some kind of solid connection. Who will face the Crashh of life? Will they succeed in uniting and becoming one big happy family all over again? to know this you will have to watch the series! You can watch this web series online on AltBalaji & Zee5 after taking the subscription. Further, everything you need to know about Crashh web series release date, cast, trailer and AltBalaji free subscription offers, the answer lies below.

Watch ‘Crashh’: Saga of sibling love and pain of being separated online on AltBalaji & Zee5

Crashh is an upcoming AltBalaji & Zee5 web series based on a theme of sibling love and the pain of being separated at a very young age. The show depicts the story of four siblings, who are torn apart by a fateful accident in early 2000. What happens when they meet again? Perhaps, this will be the first question arising in your mind! If you want to watch the web series without any ads, all you need is a premium subscription of AltBalaji or Zee5. If you think there is another way to watch Crashh web series online, you will be disappointed. To watch all the episodes of upcoming AltBalaji web series “Crashh” online, you only require subscribing to either AltBalaji or ZEE5 premium membership. Once you become an AltBalaji subscriber, you will also be able to download Crashh web series episodes for free. Additionally, you will be able to access other AltBalaji original shows and movies. As there is no limitation to the number of times a person can watch a show, you can watch it as many times as you want. So, subscribe to AltBalaji digital media platform now and watch Crash web series online.

How to buy an AltBalaji subscription

The first look of the upcoming AltBalaji & Zee5 web series ‘Crashh’ is out. The series story is based on the four siblings whose lives are changed forever when their birth parents die in a car crash. They end up in an orphanage only to be separated in four different directions later. However, fate continues to play its wicked game when years later, the oldest sibling goes on a mission to reunite his estranged family. Would they be able to do so in such a big world? To know this you have to watch the series. Find more details for the upcoming AltBalaji series ‘Crashh’ below:

AltBalaji & Zee5 upcoming web series ‘Crashh’ is all set to release on the occasion of Valentine’s Day i.e, on 14th Feb 2021. The series will stream on AltBalaji and Zee5 at 6 Pm in the Evening on 14th Feb 2021 in Hindi audio along with the subtitles.

Here’s what the creator of the show shares on social media: One crash, four siblings & a story of destiny.

It's true when they say, what's meant to be will always find a way.

A story of brothers & sisters; love and emotions!

The trailer of the web series is already released by Alt Balaji on their official channel and got a great response from the audiences. The story in the trailer begins to unfold when we see all four of the brother sisters stumbling across one another without knowing who they really are. Will they succeed in uniting and becoming one big happy family all over again? You’ll have to wait for the show to release to find out! Further, if you haven’t checked the trailer yet, have a look at it.

How to download Crashh web series episodes in high definition for free?

Looking for Crashh AltBalaji series torrent download? There is no need to spend your precious time on downloading Crashh web series episodes from a malicious website when you can download it directly from ALTBalaji. Subscribe to AltBalaji premium subscription and you can download Crashh and other AltBalaji web series in high definition for free. Currently, the yearly subscription of ALTBalaji is available at Rs. 300 only. If you are willing to subscribe to ALT Balaji for three months only, you can pay Rs. 100 or can choose for a monthly instalment of Rs. 34 for three months. After selecting the subscription plan of your choice, you can stream or download Crashh web series on ALTBalaji app in high definition.

Where Can I Watch AltBalaji Crashh Web Series Online for Free!

Zee5 is one of the best ways to stream all the latest ALT Balaji original shows online at no extra cost. If you already own a Zee5 premium membership, then you can watch Crashh web series online for free.  Just download the Zee5 app from the Play Store or go to Zee5 website and enjoy the popular romantic web series.

Want AltBalaji annual premium membership worth Rs 300 for free? If you’re a Flipkart Plus subscriber, you can get Alt Balaji subscriptions free for 1 year. The only thing is you need to earn over 250 SuperCoins. Avail AltBalaji yearly subscription using Flipkart SuperCoins and watch or download Crashh web series online at to extra cost. You can earn Flipkart SuperCoins by two methods, one is by ordering the product, and the other is by availing the services of partners that are present on Flipkart. You can also earn SuperCoins by playing various games available in the Flipkart app.

Similar to other AltBalaji web series, the latest AltBalaji Original Series ‘Crashh’ will also be available for free on the JioCinema application and website. One has just to log in if needed via their Jio mobile number before watching. Similarly, the web series can be watched through Vodafone Play App and Airtel TV app for free.

Last but not least, you can also watch ALTBalaji’s latest web series ‘Crashh’ for free via friend’s subscribed Alt Balaji account. If you are not interested in opting for the AltBalaji premium membership, you can try this simple trick to watch Crashh web series for free. The AltBalaji allows you to access one subscribed account on up to 5 devices at once. So, opt this witty option of watching from your friend’s subscribed account, that too for Free! No charges!!

How can I watch Crash all episodes without taking a subscription?

Yes, you can also watch AltBalaji’s upcoming Crashh series online for free without taking the Altbalaji premium membership. One of the best ways to watch Crashh season 1 episodes online is MX Player app. You can watch or download most of AltBalaji original shows along with Crashh season 1 for free. Most of the AltBalaji original series are also available for free on Jio Cinema and Airtel Xstream app. So, if you are not interested in availing the AltBalaji membership, try these simple tips and tricks to watch all latest AltBalaji web series for Free along with Crash season 1.

AltBalaji premium subscription plan comes at a nominal price of Rs. 100 for 3-months or Rs. 300 for a whole year. With the premium membership of AltBalaji, you can watch all AltBalaji Original series, TV shows, latest movies, comedy shows and music videos at no extra cost. So, choose an AltBalaji premium subscription plan of your choice and watch or download Crashh web series and other AltBalaji Original series online, all in high definition.