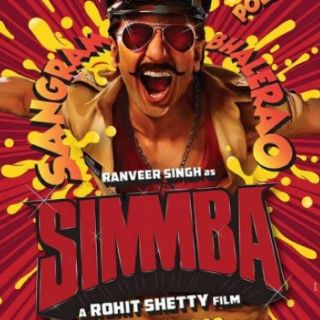 Simmba Download or Watch Online on Zee5 from 19th March. Currently there is no free trial offer on Zee5 premium subscription, So for now you can't download Simmba movie for free. But for a limited period Zee5 premium subscription for 1 month which cost you Rs.99, you can get it for just Rs.35 using coupon - GET30 & making payment via Paytm. So after subscribing you can easily download Simmba full movie in HD in Zee5 mobile App. if you want to watch Simba movie online, then you don't need to download Zee5 App. Simmba movie can be stream via Zee5 website, mobile site or app. Simmba is a 2018 Indian Hindi-language action film directed by Rohit Shetty.It stars Ranveer Singh, Sara Ali Khan and Sonu Sood, with Ajay Devgn reprising his role of Bajirao Singham in an extended cameo role. The film follows Sangram 'Simmba' Bhalerao, a corrupt police officer hailing from the same town as Singham, who is forced to lead a more righteous path after tragedy strikes those near him. if we found any legal way to download Simmba full movie for free then we will update here.

Ranveer Singh’s fan following needs no special mention and now Sara Ali Khan is stealing the hearts of everyone. After the release of the song ‘Ankh Maare’, everyone was going crazy. If you didn’t watch the movie in the theatre and waiting for it to get released on an online media streaming platform, the good news is Simmba is releasing on Zee5 soon. Avail the Zee5 subscription to watch Simmba movie for free.

Simmba is releasing on March 21st on Zee5. Sign in to your Zee5 account to add the movie in your watchlist or register yourself right away.

Catch the biggest blockbusters of 2019, #UriTheSurgicalStrike on 19th March & #Simmba on 21st March, only on ZEE5

How to Watch and Download Simmba Movie for Free?

You can easily download Simmba movie or watch it online through Zee5. For this, all you need is Zee5 subscription. In case, you are not subscribed, register yourself at a discounted price on Zee5. Currently, one-year Zee5 subscription is available at a cost of Rs. 999. For the six months plan, users can pay Rs. 599. In case, you are not interested in purchasing half-yearly or yearly plan, opt for monthly payment of Rs. 198. After obtaining the Zee5 subscription, users will be able to access movies, shows, Live Tv on five devices at a single time.
Furthermore, on making payment via Paytm, users would be able to save more. Zee5 is celebrating the 30th anniversary and for that is giving a flat 30% discount along with 50% back on payment via Paytm. In other words, users would be able to grab the yearly Zee5 subscription at Rs. 349 only. In order to avail the offer, don’t forget to use the Zee5 promo code “GET30”. After that, you would be able to watch Simmba for free on your devices.

Another way with which you can download Simmba movie in High Definition is Torrent. Easily you can look for Simmba HD download on torrent. However, downloads from Torrent are not from trusted sources. Therefore, it is advised to avoid such torrent links as much possible. Such free torrent contents are full of malicious and harmful files that could be risky for the device in which you download. So, if you want to watch Simmba movie online or download in HD quality, avail the Zee5 subscription at a discounted price now.