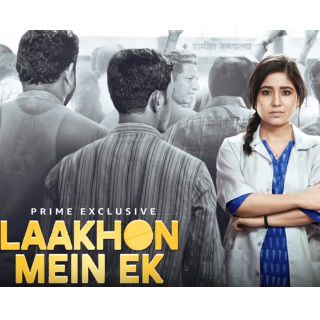 Go to the Primevideo.com offer page. Health Minister puts pressure on Dr Patwardhan to get cataract camps done, but nobody is willing to go to the village. Dr Shreya also doesn't want to go. She is happily learning under Dr Madhavi, taking care of her patients in the ICU. Meanwhile, local goon Raja Babu wants to get admitted into the ICU. There are no beds left in the ICU. Dr Shreya needs to make a decision.

Sitlapur Rural Hospital, is a dysfunctional village hospital with very low patients and even less enthusiasm amongst the staff. Shreya has to face the real challenge of reviving the hospital – right from its staff to the facilities provided. Meanwhile, Ishwar is unhappy with his pending payments. Raja Babu and Ishwar conceive a sinister plan to retrieve Ishwar's payments. A disaster brews.

While promoting the Cataract Camp, Shreya learns of the fact that Sitlapur has quite a few cases of Cataract and that the villagers strongly resent the rural hospital. Using this resentment to his advantage is Jagmohan, the village quack. Disheartened by the dull response from the villagers, Shreya seeks to find a solution by making a Deal with JagMohan.

After failing to convince the villagers to participate in the Cataract Camp, Shreya has almost accepted defeat and informs Dr.Palash about her decision to discontinue her project of setting up the Cataract Camp. An incident in the village leads her to saving a life, after which she gains the first step towards participation in the camp – trust.

Dr Shreya steps up as the CMO. But quickly it becomes clear to her that medicine supplies are irregular and a shortage is looming overhead. She goes to the District Hospital to talk about this to Dr Patwardhan. He informs her that this issue will be solved in 2 days as the government has announced a central medicine purchasing agency Pixomed. Meanwhile, Sachin has fallen sick again.

As the day of Admissions for the Cataract Removal Camp approaches, Shreya ensures no stone is left unturned in preparing for it. While everything seems to have gotten the go ahead, no supply of medicines still remains the main roadblock in the execution of the Camp. Shreya is at the brink of her patience with the struggle for supplies nearing the day of the camp.

The Cataract Removal Camp progresses smoothly without any glitches in execution. While Shreya celebrates the end of the first day of the camp with her team, a turn of events is on the way.

With everyone seeking to plead innocent in the turn of events, Shreya believes in taking responsibility for her actions. She stands up for the truth backed up by Bhola. However, her honesty has to pay a heavy price.

Not much detail about Laakhon Mein Ek season 2 has been revealed yet. However, it has been declared that Shweta Tripathi and Kalyan Ratha are among the main characters of the show.

The second season of Laakhon Mein Ek will release on April 12th, 2019 on Amazon Prime Video as it is a Prime Original series. Therefore, to watch and download Laakhon Mein Ek season 2 for free, you would need the Prime subscription.

What is the Story of Laakhon Mein Ek Season 2?

The storyline of Laakhon Mein Ek season 2 revolves around a girl - Dr Shreya - who comes to Sitlapur village to organize a cataract camp. She soon finds out that the villagers are least dependent on government-aided healthcare. The reason being the lack of medical supplies due to dirty political games. The medical staff she wishes for is unsupportive and neglective where one’s health is at stake. After looking at all conditions, she decides to fight the system, but the question is would she be able to bring the change or will get changed herself ultimately?