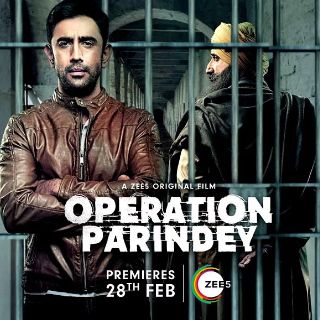 Why Should you Watch This Movie?

Operation Parindey, an action thriller film based on one of the most controversial jailbreaks in the history of India.

Zee5 Original Film ‘Operation Parindey’ Streaming Soon! How to watch or download the movie for free?

Based on the most controversial jailbreak in the history of India, the ZEE5 Original film ‘Operation Parindey’ is coming soon on Zee5 streaming platform. Check how to watch or download Operation Parindey movie for free!

Zee5, an online video streaming platform, is all set to release another original content to your watch-list. Yes, you’re right! Operation Parindey is an upcoming Zee5 original film which is inspired by real events.  Starring Rahul Dev and Amit Sadh on lead roles, you’ll also find Kunal Kumar, Ameet Gaurr, Rucha Inamkar on supporting roles. The Operation Parindey movie is a fictional account of one of the most controversial jailbreaks in the history of India. The movie story is a fast-paced action thriller based on interesting events and happenings post-surgical strikes. Rest assured, it will keep you on the edge of your seats, biting your nails during the entire movie. If you’re looking to watch the film online, you only require subscribing to ZEE5 membership. Here, we tell you how to watch Operation Parindey movie free watching offers, Zee5 subscription offers, as well as movie release date, cast and plot.

Operation Parindery is a Zee5 original film scheduled to be premiered on March 7, 2020. Based on the events post-surgical strike in 2016, the movie can be streamed online only on Zee5 video streaming platform. Also, don’t forget to check how to watch or download Operation Parindey movie for free on Zee5.

Don’t want to pay for ZEE5 premium account subscription? Don’t worry. We got you covered. With the following hacks, you can access all ZEE5 content, including the latest movies, web series. TV shows, Zee5 originals, and documentaries for FREE!!! Check them all!

If you're an Airtel mobile customer using Infinity Postpaid plans of INR 499 and above, then you have a golden chance to avail one-year Zee5 premium membership for FREE! Upgrade your monthly rental plan to Rs 499 and enjoy the unlimited benefits of Amazon Prime with Airtel.

How to activate Zee5 All-access Premium Pack with Airtel Account?

If you’re a Vodafone Idea subscribers, then you can get “exclusive access” to the ZEE5 Theatre for a whole month. Here’s how you can activate your 1-month free membership and watch Zee5 Original shows and movies including upcoming Operation Parindey for Free!

Want Zee5 annual premium membership worth Rs 999 for free? If you’re a Flipkart Plus subscriber, you can get Zee5 subscriptions free for 1 year. The only thing is you need to earn over 350 SuperCoins. You can earn Flipkart SuperCoins by two methods one is by ordering the product, and the other is by availing the services of partners that are present on Flipkart. You can also earn SuperCoins by playing various games available in the Flipkart app.

How to activate Zee5 annual membership with Flipkart SuperCoins

ZEE5, India’s largest multi-lingual OTT platform, and Gaana, the country’s popular music streaming service are offering each other’s users free access to their platforms. Yes, that's true! So, if you’re a Ganna Plus premium user, you can access all the Zee5 content, including Operation Parindey movie at no extra cost.

How to get Zee5 membership with Ganna Plus subscription?

Last but not least, you can also watch Operation Parindey movie for free via friend’s subscribed Zee5 account. If you are not interested in opting for the Zee5 premium membership, you can try this simple trick to watch the ‘Operation Parindey’ movie for free. The Zee5 allows you to access one subscribed account on up to 5 devices at once. So, opt this witty option of watching from your friend’s subscribed account, that too for Free! No charges!!

Operation Parindey movie is based on the real story of a 2016 jailbreak in which six inmates escape from Delhi’s safest jail. Prisoner chief Monty Singh is plotting a major terrorist attack in the country. Manoj is given the responsibility to stop and catch Monty Singh. Will Manoj find and catch Monty Singh?, this will be seen in this movie. Subscribe to Zee5 monthly or yearly membership in order to watch Operation Parindey film in high-definition.

How to download the next Zee5 Original film ‘Operation Parindey’ in high definition for free?

The best part about ZEE5 is that you can watch your favourite movies and TV shows everywhere and anywhere. Enjoy from the website or with the ZEE5 mobile app on your mobile, tablet, or select Smart TVs — on up to 5 devices at once. So, download the Operation Parindey movie on your smartphone or tablet through Prime Video and watch it anywhere without internet connectivity.

Steps to download movies from ZEE5 for offline viewing

Whether you’re travelling via metro after a long day at work or are going to be stranded in a cabin in the woods for the weekend, you can rest easy; it’s possible to download ZEE5 videos for offline watching. Here’s how.

ZEE5 is a video on demand platform, allowing users to watch refreshing video content such as web series, shows, movies, and much more. If you’re looking to watch or download Operation Parindey film online on your laptop, desktop, smartphone or tablet, you just require a ZEE5 membership. ZEE5 digital media premium account plan starts from just Rs 99 for 1 month, Rs 599 for 6 months, and Rs 999 for a whole year. ZEE5 subscription allows you to stream all the latest movies, exclusive TV shows, Live channels and ZEE5 Originals, all in High Definition. So, subscribe to ZEE5 now and watch Operation Parindey movie in high definition.

After subscribing, you can watch or download Operation Parindey film and more latest movies for Free on Zee5.