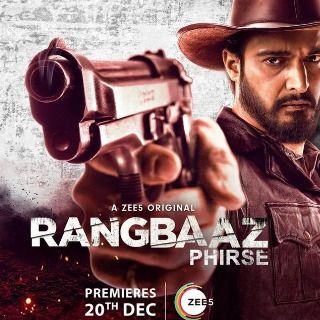 Why Should You Watch?

Rangbaaz Phirse Zee5 Web Series Download or Watch Online: Currently there is no free trial offer on Zee5 premium subscription, So for now you can't download or watch Rangbaaz Phirse series for free. But for a limited period time, you can subscribe Zee5 premium for 1 month at just Rs.99. So after subscribing you can easily download Rangbaaz Phirse series all episode in HD in Zee5 mobile App. if you just want to watch online, then you don't need to download Zee5 App. This web series can be streamed via Zee5 website, mobile site or app. Rangbaz Phirse is the story of a young guy who falls through the cracks because of politics and is robbed of his youth which subsequently ruins his life. if we found any legal way to download Rangbaz Phirse Zee5 Web Series full episode for free then we will update here. Another Way to Watch Rangbaaz Phirse for Free is get Zee5 active subscription login access from your friends and family.

Saqib Saleem, Ravi Kishan, Tigmanshu Dhulia, Aahana Kumra, and Ranvir Shorey-starrer ZEE5 Original show #Rangbaaz was a huge hit in 2018. In 2019, get ready for Chalbaazi Phirse, Jaanbaazi Phirse, Dagaabaazi Phirse in Rangbaaz Phirse! The second instalment of Rangbaaz, based on Gorakhpur’s famous criminal Sriprakash Shukla, is all set to hit the web on December 20. This time, Rangbaaz features a story of the dreaded criminal of Rajasthan.

To watch the second season of Rangbaaz online, you only require subscribing to ZEE5 membership. Here is everything you want to know about the newest edition of ZEE5 Original Rangbaaz Phirse show, release date, and ZEE5 subscription offers, the answer lies below.

Rangbaaz Phirse is the second season of ZEE5's flagship franchise Rangbaaz and  the web series is all set to hit the internet on December 20, 2019.

Rangbaaz Phirse web series trailer is out now and gaining huge popularity among the audiences. The two-minute-long video clip begins with a flashback of Rangbaaz season 1, which starred Saqib as Shiv Prakash Shukla, a notorious and most wanted gangster from Gorakhpur. It shows how an incident of his sister being eve-teased led to his entry into the dark world of crime and mafia. The video then features Jimmy as Amarpal who exercises heavy influence in Rajasthan. Politicians come to him for help while Zeeshan Ayyub essays a cop waiting to hunt Singh down. Gul and Sushant play Amarpal’s aides while Sharad essays his arch-nemesis. Jimmy’s fearless avatar as a gangster with a knack for style is a fresh breeze. Rangbaaz Phirse tells the story of a young guy who falls through the cracks because of politics and is robbed of his youth which subsequently ruins his life. If you haven’t watched the trailer yet, watch it here.

Jimmy Sheirgill is playing the central character Amarpal Singh who is a notorious and feared gangster of Rajasthan. Singh is hailed in high regard by the people and politicians of the state. Sharad Kelkar, who most recently featured in Amazon web-series The Family Man, is playing Raja Phogat role. Raja Phoghat does an illegal liquor trader in Rajasthan who is fond of cars and women and has a stronghold in Jatt politics of the state. Gul Panag plays the female lead in the show while Zeeshan Ayyub, Spruha Joshi, Harsh Chhaya, and Sushant Singh star in important roles. Below is the complete cast of Rangbaaz Phirse web series.

How to download the upcoming ZEE5 web series ‘Rangbaaz Phirse’ in high definition for free?

If you are looking for Rangbaaz Season 2 torrent downloads, then drop your plans right away. Do not waste your energy and time on looking for Rangbaaz Phirse from an untrusted source. Like the show, Rangbaaz Phirse will be available only on ZEE5; you can watch or download it from there for free. If you already have a ZEE5 monthly or yearly subscription, you can download Rangbaaz Season 2 in high definition for free. You can also download other ZEE5 video contents such as ZEE5 Originals, latest blockbuster movies, exclusive web series, all in high definition for free.

In case, you are not interested in opting the ZEE5 subscription, either annual or monthly, you can try a simple trick to watch Rangbaaz Phirse web series for free. ZEE5 provides you with a witty option of watching from your friend’s subscribed account, that too for Free! No charges!

ZEE5 is a video on demand platform, allowing users to watch refreshing video content such as web series, shows, movies, and much more. If you want to stream or download Rangbaaz Season 2 online in your laptop, desktop, smartphone or tablet, you just need a ZEE5 membership. ZEE5 digital media subscription plan starts from just Rs. 99/month and its annual subscription will cost you Rs. 999. ZEE5 subscription allows you to stream all the latest movies, exclusive TV shows, Live channels and ZEE5 Originals, all in High Definition. So, subscribe to ZEE5 now and watch Rangbaaz Phirse show in high definition.

ZEE5 also takes care of their users pocket, allowing you to buy a ZEE5 Originals subscription at a lesser price. Now select your ZEE5 subscription plan and complete your payment using Amazon Pay to avail up to Rs. 250 cashback. Also, Zee5 customers can avail Rs. 50 off on half-yearly or yearly plan with Rupay platinum debit and All credit cards.