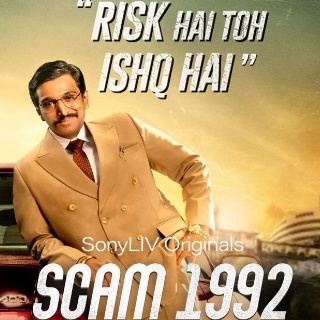 A True Stire Based on Harshad Mehta

Scam 1992 Web Series Download or Watch for FREE: Currently there is no Free trial offer for SonyLIV premium. So you can't watch Scam 1992 Series Full Episodes for Free. There is no any other direct way to watch this Scam 1992 show for FREE. But Flipkart is offering SonyLIv Premium subscription in exchange of Super Coins. So if you have SuperCoins in Your Flipkart account, then you can redeem 500 Super Coins for 6 Month or 999 Super Coins for 1 year of SonyLiv subscription. or Another way is just Subscribe SonyLIV premium pack starting at Rs.299. After Subscribing, you can watch Scam 1992 Web series all episodes for FREE or you can also Download Full episodes of Scam 1992 series in SonyLIV mobile app to watch it anytime. Another way to watch Scam 1992 series for FREE is to get an active SonyLiv premium account login details from Friends and family.

Harshad Mehta Scam 1992, the highest-rated Hindi Indian web series on IMDb, is now streaming on SonyLIV streaming platform. Here’s how you can watch or download Scam 1992 web series for free.

Scam 1992 – The Harshad Mehta Story is a Hindi web series that follows the life of Harshad Mehta, who was accused of 5000 Crore banking scam that took place in 1992. Inspired from the book “The Scam: Who Won, who Lost, who Got Away” by Debashis Basu and his wife Sucheta Dalal, Scam 1992 is one of the most watch worthy series you will come across. The series revolved around the life of Harshad Mehta – a stockbroker who single-handedly took the Indian stock market to great heights. But, was accused of a banking scam of nearly 5000 Crore that eventually led to his fall. The show features in detail, both the surprising rise as well as meteoric fall of Harshad Mehta. If you haven’t watched Scam 1992 web series yet, watch it now on SonyLIV. The Scam 1992 web series is available on SonyLIV, you can watch or download full Scam series episodes in HD quality.

Don’t want to pay for a SonyLIV premium account subscription? Don’t worry. We got you covered. With the following tips and tricks, you can watch the best, trending SonyLIV originals, TV shows, web series and movie for FREE!!! Check them all!

There is also another way through which you can download or watch Scam 1992 web series for free via friend’s subscribed SonyLIV account. If you are not interested in opting for the SonyLIV premium subscription, either monthly or annually, you can try this simple trick to watch Harshad Mehta Scam 1992 series for free. The SonyLIV allows you to access one subscribed account on up to 5 devices at once. So, opt this witty option of watching scam 1992 web series from your friend’s subscribed account, that too for Free! No Charges!!

If you are looking for Scam 1992 series torrent download or for other malicious websites then drop your plan right away. Instead of downloading Scam 1992 web series from leaked websites like tamilrockers, 123movies, 9xmovies, Filmyzilla or from torrent websites, download them in high definition from SonyLIV after taking the subscription. The monthly subscription of SonyLIV premium costs you around Rs. 299, while the six-month premium is available for Rs. 699 and one-year subscription plan is priced at Rs. 999.

SonyLIV premium subscription comes bundled with a slew of TV channels offered by Sony Entertainment Television. If you want to watch live cricket matches during the upcoming cricket season, SonyLiV premium subscription would be a great choice. It also comes with a sports channel portfolio including 11 channels such as Sony TEN1, Sony TEN2, Sony TEN3, Sony ESPN, and Sony SIX. So, select the SonyLIV subscription plan of your choice and download or watch Scam 1992 web series in high definition for free.

SonyLIV is compatible with a slew of devices including all android and iOS smartphones, all tablets, Sony smart TVs, Android TVs, Google Chromecast and Apple TV. It is also supported by a slew of web browsers such as Microsoft Edge, Mozilla Firefox, Google Chrome, Internet Explorer and Safari 9. So, subscribe now to SonyLIV premium membership and watch Scam 1992 web series online on any screen of your preference.

So what are you waiting for? Download or Watch Scam 1992 series available on SonyLIV streaming platform and enjoy the highest-rated crime drama web series with your family and friends.