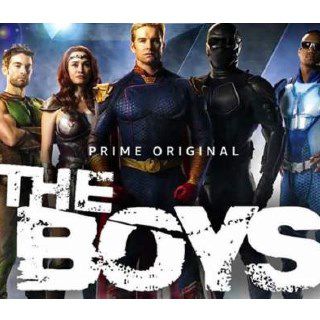 Watch The Boys Season 2 from 4 September on Prime Video

Why should you Watch this Series?

The second season of The Boys will see the return of most of the surviving members of the cast, including The Boys themselves headed up by Karl Urban as the intimidating Billy Butcher.

Watch The Boys Season 2 from 4 September on Prime Video

Amazon Original Series ‘The Boys Season 2’ on Prime Video - How to Download or Watch the series online for Free!

It’s been well over a year since the first season of The Boys hit Amazon Prime Video and fans are understandably anxious to get their hands on the second season. Finally, the wait is over! The Boys season 2 release date is out now and the show will premiere on 4th September 2020 on Amazon Prime Video. Adapted from the popular Garth Ennis and Darick Robertson comic, the second season sees a group of nobodies on the run from The Seven - a corporate-owned and corrupt group of superheroes.

To recall, The Boys premiered it’s first season during July 26th last year on Amazon Prime. Its first season ended with Butcher in grave danger, as his psychotic rival Homelander dumped him on the doorstep of his wife, whom he had thought to be dead. It is expected that the fight will be even more brutal in season two as so-called super terrorists enter the fray, and sensitive real-world issues are tackled head-on. The show’s official trailer is already getting highly positive responses from all the corners. We must say, the viewers will soon get a new binge-watch content amidst the lockdown.

Moreover, if you’ve already binged on the first eight episodes of The Boys, here is the second installment waiting for you. Binge-watch the second season of The Boys for free on Prime Videos. And if you’re new to Amazon Prime Video, take your Prime Video 30 day free trial subscription now and enjoy this American superhero web series in high definition at no extra cost. Here is everything you want to know about The Boys 2 release date, cast, and prime video subscription offers, the answer lies below.

If you are bored of regular television drama and repeated movies during this lockdown and looking for something interesting to watch, don’t wait anymore and start binge-watching The Boys series on Amazon Prime Video. The Boys is an American superhero web series based on the comic book of the same name by Garth Ennis and Darick Robertson. As its maiden season already gained huge popularity among the viewers, the creators of the show are all set to premiere its second season. So, get ready to watch The Boys season 2 online on prime video as the show would premier on September 4 globally. If you don’t have a Prime Video membership, no need to worry as you can watch The Boys season 2 all episodes for free by joining Amazon 30 days free trial. This free trial will give you access to watch thousands of great movies, tv shows, and tv series for free.

The second season of The Boys will see the return of most of the surviving members of the cast, including The Boys themselves headed up by Karl Urban as the intimidating Billy Butcher. The other cast expected to return for season two, including Jack Quaid as Hughie, Tomer Kapon as Frenchie, Laz Alonso as Mother’s Milk, and Karen Fukuhara as The Female.

The Boys Season 2 trailer is out now. Amazon Prime has launched the latest and presumably final The boys season 2 official trailer. If you were uncertain that it would be as brutal as last year, you can rest easy knowing that this is looking like everything we could have wanted from a new season: more blood, more gore, and The Boys on the run. Watch The Boys 2 official trailer now, HERE!

Ways to Watch The Boys Season 2 Online for Free!

If you’re looking for The Boys Season 2 torrents download, then drop your plans right away. Do not waste your time and energy on looking for the Prime Video Original The Boys Season 2 episodes from an untrusted source. As the web series that is The Boys 2will only be streaming on Amazon Prime Video, you can watch or download it from here at no extra cost. Yes, you heard it right! Currently, Amazon prime is offering a 30-days free trial to its new users, but there are some other ways through which you can watch Prime Video content for free. Some of the free methods are listed below only for you.

If you’re new to Prime Video and haven’t started your trial now, activate your 30-days trial and watch all the latest movies, TV shows, web series including Prime Video Original series ‘The Boys Season 2’ all episodes for free. No charges!!  Signing up for Prime Video 30 days free trial membership is a simple and easy process. Follow the below illustrated steps and you can easily activate your trial.

If you’re an avid Airtel postpaid user, Airtel brings you a golden opportunity to avail one year of Amazon Prime membership at no extra charge. All you have to do is upgrade your monthly rental plan to Rs 499 and enjoy the unlimited benefits of Amazon Prime with Airtel. That’s not all, Airtel prepaid users can recharge their prepaid account with an Rs. 349 monthly pack and get Amazon Prime 1-month membership for free! No charges! Grab the benefit of Airtel recharges and watch exclusive TV shows, blockbuster movies, including The Boys season 2 in HD, that too for free on Prime Video.

If you’re wondering how you can avail your free Airtel Prime Video offer, just follow the below mentioned steps and you’re done!

In case you are not interested in opting for the Prime membership, either annual or monthly, you can try a simple trick to watch The Boys Season 2 episodes in high definition for free. The Amazon Prime Video provides you with a witty option of watching from your friend’s subscribed account, that too for Free! No charges!!

How to Download The Boys Season 2 Episodes for Free through Amazon Prime?

No matter whether you’re travelling in a metro after a long day at work or are going to be stranded in a cabin in the woods for the weekend, you can rest easy; it’s possible to download Amazon Prime videos for offline watching. Here’s how.

Please note that the downloading is only available at Amazon Prime Video App!

Amazon Prime Videos is a popular video-on-demand service online which is offering a 30-days trial period to all users who haven't taken the Prime Video membership yet. After completion of your trial period, you have two subscription offers: