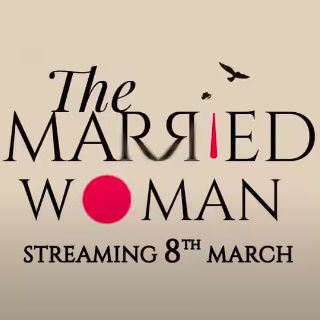 Based on the acclaimed book by Manju Kapur

ALTBalaji and ZEE5 much-awaited web series ‘The Married Woman’ trailer is out now. Starring Ridhi Dogra and Monica Dogra in the predominant roles of Aastha and Peeplika respectively, The Married Woman story is all about a middle-class woman Astha who seems to be on a journey to discover herself. Aastha is a married woman, a doting wife and a dutiful mother, but she comes at a crossroads with life once she crosses paths with the unconventional artist Peeplika. The series marks yet another progressive and pathbreaking piece of content that continues the home-grown streaming giants' legacy. Now, the show's teaser is here, and it not only breaks the shackle of our notions but also leaves us with the recurring question- What is love?

Get ready to dive into an enthralling story of Astha who finally felt love when she crossed paths with a kindred spirit, a soul that connected with hers. The new AltBalaji Original 'The Married Woman' series is all set to be streamed online on AltBalaji and ZEE5 digital media platform from 8th March. To watch the first season of The Married Woman, you only require subscribing to AltBalaji & ZEE5 membership. In this post, you will come to know how you can watch and download AltBalaji The Married Woman episodes for free.

How to Watch The Married Woman Series online?

The all-new AltBalaji original series ‘The Married Woman’ is set to hit the screens on the occasion of Mothers Day in India. A story of two souls who rose beyond ‘sexual and societal boundaries’, The Married Woman looks like a promising take on love between people of the same gender. To watch the new season of the popular series without any interruptions, subscribe to the premium viewing plans on ALTBalaji and Zee5, which lets you access all episodes without limits, download offline for anytime & anywhere viewing, and accessibility on 5 devices. Below are the steps to get started with the ALTBalaji and Zee5 subscriptions for streaming The Married Woman in high definition quality.

The Married Woman is an adaptation of the 2002 novel of the same name by Manju Kapur which features a story of a married woman Astha. She has everything an educated, middle-class Delhi woman could ask for - a good daughter, a dutiful loving husband, a teacher, a homemaker and affluent surroundings. So why even after this she gets into an unconventional relationship with a younger woman? She begins an extra-marital relationship with a much younger woman, Pipee, the widow of a political activist and jeopardizes everything.

The official release date of The Married Woman web series has been announced. The series is scheduled to be released on March 8 and the users can watch the series from the very same day on AltBalaji & Zee5 streaming platforms. If you haven’t already subscribed to AltBalaji, you can sign up for the streaming service for a nominal monthly charge of Rs. 100 for 3 months.

The cast of AltBalaji’s upcoming web series ‘The Married Woman’ couldn’t have got better. Recently, the makers of the show revealed the characters of The Married Woman series and introduced them with their characteristics masked on their faces. The series features Ridhi Dogra (Aastha) and Monica Dogra (Peeplika) in the predominant roles. Alongside Ridhi and Monica, the series stars Imaad Shah, Divya Seth Shah, Nadira Babbar, and Suhas Ahuja in the supporting roles.

The Married Woman teaser gives a beautiful nostalgia of the 90s. It starts with a narration that tells the audience how the Supreme Court’s judgment on Section 377 of the Indian Penal Code, which criminalised sexual conduct between adults of the same sex, healed a wound of 27 years. The teaser then takes us back to the year 1992 when the riots after the Babri Masjid demolition created unrest in the country. The short and intriguing teaser of the show features a few catchy dialogues. If you haven’t watched The Married Woman trailer yet, watch it now, here:

How to download The Married Woman all episodes in high definition for free?

How can I watch The Married Woman web series without taking a subscription?

Zee5 is one of the best ways to stream all the latest AltBalaji original shows online at no extra cost. If you already own a Zee5 premium membership, then you can watch The Married Woman web series online for free.  Just download the Zee5 app from the Play Store or go to the Zee5 website and enjoy the popular romantic web series.

Want AltBalaji annual premium membership worth Rs 300 for free? If you’re a Flipkart Plus subscriber, you can get free AltBalaji premium membership for a whole year. The only thing is you need to earn over 250 SuperCoins. Avail AltBalaji yearly subscription using Flipkart SuperCoins and watch or download The Married Woman series online at to extra cost. You can earn Flipkart SuperCoins by two methods, one is by ordering the product, and the other is by availing the services of partners that are present on Flipkart. You can also earn SuperCoins by playing games available in the Flipkart app.

Similar to other AltBalaji web series, the latest AltBalaji Original Series ‘The Married Woman’ will also be available for free on the JioCinema application and website. One has just to log in if needed via their Jio mobile number before watching. Similarly, the web series can be watched through Vodafone Play App and Airtel TV app for free.

Last but not least, you can also watch ALTBalaji’s latest web series ‘The Married Woman’ for free via friend’s subscribed AltBalaji account. If you are not interested in opting for the AltBalaji premium membership, you can try this simple trick to watch The Married Woman web series for free. The AltBalaji allows you to access one subscribed account on up to 5 devices at once. So, opt this witty option of watching from your friend’s subscribed account, that too for Free! No charges!!

AltBalaji premium subscription plan comes at a nominal price of Rs. 100 for 3-months or Rs. 300 for a whole year. With the premium membership of AltBalaji, you can watch all AltBalaji Original series, TV shows, latest movies, comedy shows and music videos at no extra cost. So, choose an AltBalaji premium subscription plan of your choice and watch and download The Married Woman and other AltBalaji Original series online, all in high definition.