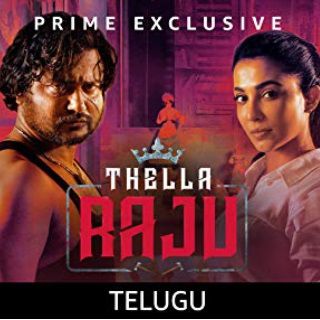 Have you finished all the episodes of Mirzapur and desperately waiting for a new show to pull you out of your misery caused by boredom?  Well, guess what?! You won’t have to wait for a show to keep you entertained and occupied, and at the same time will keep you on the edge of your seat with its nail-biting twists and turns. Thella Raju, a show packed with action, drama, and some serious gangster content is one show that is a must watch for all.

Amazon is providing 30 days free trial for amazon prime video new users and that how you can get the opportunity to watch Thella Raju Telugu Series online for free. Start your 30 days trial today and start binge watching new shows, movies and series for free on Amazon prime videos.

What is the Storyline of Thella Raju?

Dubbed from a Tamil show, Thella Raju is a Telugu show that has everything that will leave the audience wanting for more. The show is based one man’s, Deva, desire to become the drug lord in Chennai and a cop sworn to stop catch him at any cost. Deva, played by Bobby Simha has one goal on his mind and will stop at nothing. Whereas Theresa, the cop, has dedicated herself to catching him and believes in justice being served. The show is all about the cat and mouse chase between them. Thella Raju promises you loads of action and high-intensity drama. If you love shows that have an air of mystery to it, then this show has to be on your watch list.

Directed by Guhan Senniappan, Thella Raju is sure to take on the audience by surprise at every turn. We won’t be exaggerating if we said that Thella Raju will be gripping the audience so bad that they won’t be able to stop them from binge watching it.

Thella Raju has Bobby Simha playing Deva. Simha has made the audience go crazy for him since he presented his skills in Jigarthanda and Neram. Another important character you must look out for in the show is, Gayathrie Shankar, who with her perfect sense of acting has done justice to her character.

Adding on the excitement emanating from Guhan Senniappan’s outstanding direction sense, show’s DOP,  Madhesh Manickam’s work will take you through the scenes like never before. The shots have a realistic feeling and the scenes get as real as possible.

Written by Guhan Senniappan, Thella Raju won’t let you rest till you have finished it and known how it all ends. Or maybe doesn’t, does it? Well, in order to know the answer to how it all ends for Deva and his gang, you will have to watch Thella Raju for yourself. No spoilers being distributed here.

How to Watch Thella Raju Online for Free?