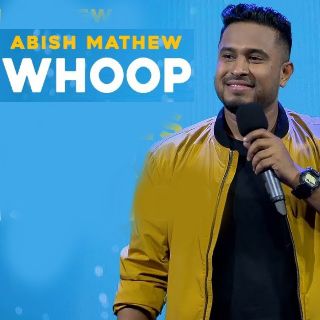 Are you thinking about downloading Whoop Abish Mathew Comedy Show from the torrent? If that is your plan then drop it right away. Why trust a website which is full of malicious content when you can watch Whoop all episodes online for free? Yes, it is possible to watch Whoop Abish Mathew Comedy Show Online for Free. For this, all you need is Amazon Prime subscription and after that, you can watch as many shows and movies as you want for free.

What is Whoop! Abish Mathew show?

Abish Mathew, a famous stand-up comedian and Youtuber, is coming with a brand new show - Whoop!. Previously, he has worked with All India Bakchod and has been a host at Comicstaan and Son of Abish. The Whoop! Abish Mathew is a one-hour long show where you will see how he set to be a punchline his entire life.

About Abish Mathew - Comedian of Whoop on Amazon Prime

He sings, he dances, and when neither are enough, he tells jokes. One of the most recognized faces of Indian comedy, Abish Mathew was one of the first Indian Youtube stars, who has over 30 million views on his channel. These videos include sketches, stand-up, and of course, his hit talk-show, Son of Abish, which has featured stars like AIB, Vishal Dadlani, Kanan Gill, Badshah, Taapsee Pannu, Cyrus Broacha, and Vir Das. Son of Abish is now into its third season and brings with it something different each time! The stand-up comedian has performed 1000+ shows across India and the world, including New York, Canada and the prestigious Utrecht International Comedy Festival (Holland). Abish has created content for brands like Breezer Vivid and Netflix, and his brand of clean humor has won over crowds in clubs, colleges and corporates alike. He made his Bollywood debut in the film Meri Pyaari Bindu in 2017. Presently, Abish is touring the country with the comedy show LOLStar. Furthermore, he also featured on a stand up showcase called Special Showcase with fellow comedian Zakir Khan. At the same time, he is also part of a panel of judges in Comicstaan, a nine-episode series, to mentor and find India’s next comic sensation! Read More...

My comedy special #WHOOP is now streaming on @PrimeVideoIN :)

What comes after kissing?

To watch Abish Mathew show on Amazon Prime, you have to avail the Amazon Prime offer of 30 days. On becoming the Amazon Prime member, you will get access to Bollywood & Hollywood movies, web series, comedy shows, and Prime original shows for free. If you are a first time subscriber to Amazon Prime, you will get first one-month free access to all content available on the media streaming portal. In other words, there is no need to pay a single penny from your pocket to watch Whoop Abish Mathew comedy show online for free at the Prime Video.

To avail the Whoop Abish Mather Amazon Prime offer, all you have to do is register yourself on the Amazon platform and become a Prime member. For the first 30 days, Amazon will not charge you anything and before the offer expires, you will receive an update via email from the Amazon.